C&B Marine Christens the Christine B

On August 5, 2012, the owners and employees of Carlisle & Bray Enterprises christened one of the company’s towboats as the Christine B at its Silver Grove fleeting operations in honor of Christine Bray, matriarch of the Bray Marine family.

“We thought it was appropriate to christen one of the towboats in our fleet to honor our mother, who along with our dad, built Bray Marine from literally nothing into a thriving river business that today is part of the Carlisle & Bray family of companies,” said Chad W. Bray, chief operating officer for C&B Marine.

The Christine B — a 1200-horsepower, Tiger-class towboat built by Serodino, Inc. — is one of 16 towboats operated by C&B Marine. The company also has 50 barges, “multiple” deck floats for clamshell unloading, and several port and dock facilities. The company employs 125 employees.

Another towboat in the company’s fleet is named the Fran C in honor of Fran Carlisle, the mother of Robert W. Carlisle, president of C&B Marine, and wife of Wayne Carlisle. 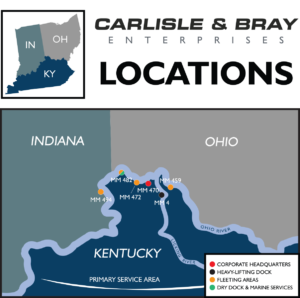